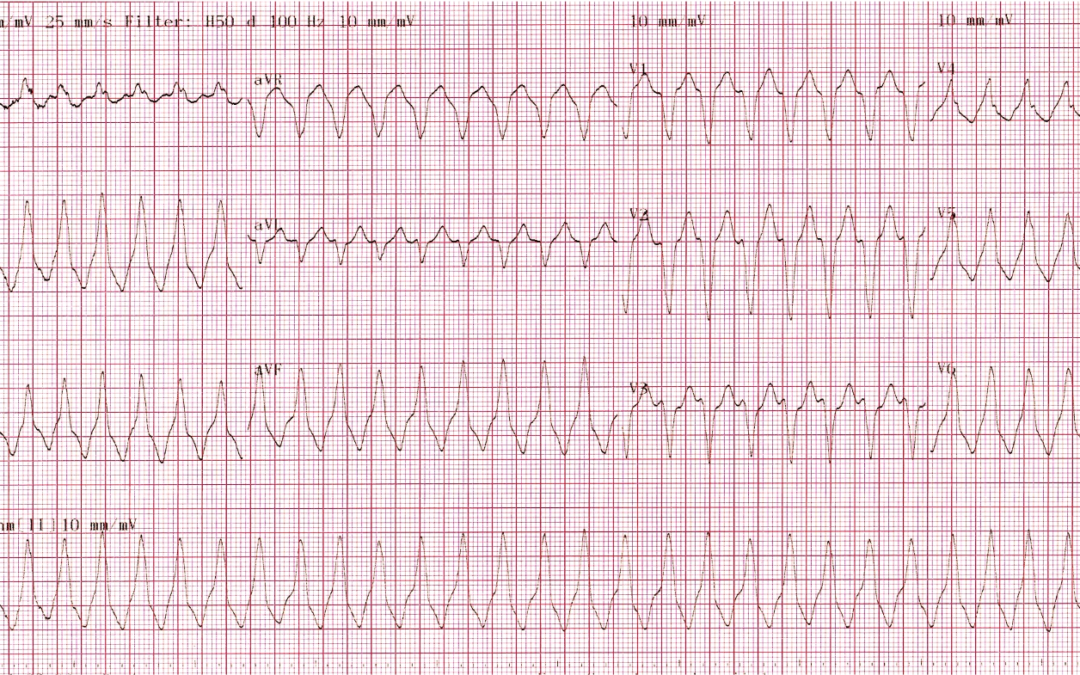 This ECG was recorded from a 32-year old male while he was experiencing ‘palpitations’. He had no history or signs of heart disease and when he was back in sinus rhythm he had an echocardiogram which was entirely normal.

What is the rhythm most likely to be? 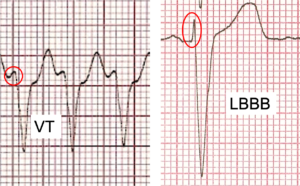 As we have previously discussed, any regular, broad QRS tachycardia should be considered VT unless it can be proved otherwise. So, is there anything about this ECG that leads us to think that it is likely to be an aberrantly conducted SVT? A P-wave preceding every QRS would certainly lead us in that direction, but we don’t see that here. An absolutely typical bundle branch block pattern might be strong evidence for an SVT with aberrant conduction, and the QRS morphology here is certainly similar to that seen in left bundle branch block(LBBB), but is it typical? When the QRS is broadened as a result of a fixed bundle branch block (left or right) or because of rate-related aberrancy, the QRS usually has an initial sharp deflection before the complex broadens out. This is because the electrical impulse that enters the ventricles proceeds rapidly at first before encountering the tissue that is not able to conduct, at which point impulse propagation continues more slowly. This is in contrast to the situation with a beat of ventricular origin, as in ventricular tachycardia. Here the impulse proceeds slowly from the moment it emerges fromthe ventricular muscle, so the QRS is broad from the start. Often in this case the QRS finishes more quickly than in started because the wave of depolarisation within the ventricular muscle may encounter healthy conduction tissue which enables it to speed up.
The easiest way to assess the initial QRS deflection is to examine a biphasic complex – one with both a negative and a positive component. Figure 1 contrasts the QRS of the ECG under discussion with one from someone with LBBB. Both extracts are from V3. The QRS on the left begins with a slow-rising deflection (ringed in red), and this is because the rhythm is VT. This is very different from the initial QRS deflection (again ringed in red) in the complex on the right, which is very sharply inscribed because this is a case of LBBB. So, although the QRS morphology in this tachycardia resembles that of LBBB, it is not absolutely typical of it.
Why should an otherwise healthy 32-year old suffer from VT? This is almost certainly an idiopathic VT, the group of VTs that have in common that they are not due to structural heart disease or any metabolic, electrolyte or drug-induced disorder. In October 2021 we discussed the subject of idiopathic VT and the example I showed then was of a fascicular VT. However, the most common type of VT is right ventricular outflow tract (RVOT) tachycardia, a VT that originates, as the name implies, in the outflow tract of the right ventricle. The characteristic ECG features of this tachycardia are a left bundle branch block QRS morphology and an inferior QRS axis (positive complexes in leads II, III and aVF).
This then is almost certainly a VT and in view of the history and ECG features, it is most likely to be an RVOT VT. RVOT VTs can often be terminated acutely by a vagal manoeuvre or by the administration of adenosine or verapamil. They arerarely lethal, but if troublesome they can often be cured permanently by catheter ablation of the site of origin of the VT.
For anyone interested in more detail of how the width of the initial (and terminal) portion of the QRS can be used to help differentiate between VT and SVT with aberrancy, the description of the diagnostic algorithm proposed by Vereckeiet al in 2007 may be helpful (1).
1. Vereckei A, Duray G, Szénási G, Altemose GT, Miller JM. Application of a new algorithm in the differential diagnosis of wide QRS complex tachycardia. Eur Heart J. 2007 Mar;28(5):589–600. DOI: 10.1093/eurheartj/ehl473