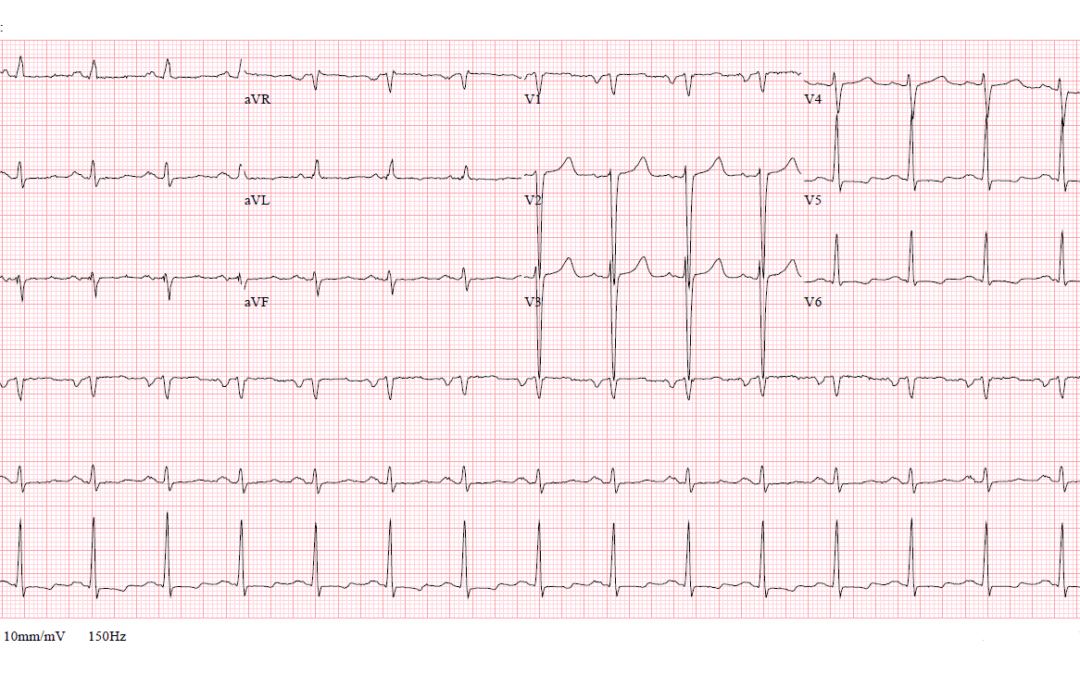 This month’s ECG was recorded from a 42-year old male who was complaining of gradually increasing exertional dyspnoea over several months. He was also experiencing breathlessness when lying flat. He had not had any chest pain. Physical examination revealed swollen ankles and feet and a raised jugular venous pressure. Blood pressure was135/90mmHg. There was an apical pansystolic murmur.

Does the ECG provide any clues as to the probable clinical diagnosis?

Let’s begin with a systematic description of the ECG, then go on to discuss what it might all mean.

Let’s consider some of the possible causes of some of these abnormalities:

Now, let’s bring the clinical details of the case into the discussion. The history is not suggestive of coronary artery disease, so old MI or ongoing myocardial ischaemia in this case are unlikely. The blood pressure is normal, ruling out hypertensive heart disease. Although the pansystolic murmur is most likely due to mitral regurgitation, this is not necessarily caused by primary mitral valve disease: it may be secondary to left ventricular systolic dysfunction. Cardiac amyloidosis is a possible cause of several of the abnormalities listed, as well as the clinical features, but such deep S waves in V2 and V3 are not typical of the condition.

As Max pointed out, the combination of low-amplitude QRS complexes in the limb leads (all complexes not more than 0.8mV); dominant S wave in V4; and S(V1/V2) + R(V5/V6) at least 3.5mV is known as Goldberger’s triad, and this is reported to be highly suggestive of a dilated cardiomyopathy.

First described in 1982, Goldberger’s triad is generally reported to have high specificity but low sensitivity(1). This means that most patients with these features will have a dilated cardiomyopathy but the absence of the triad certainly does not exclude the diagnosis.

As we have seen, all the abnormal features of this ECG individually have several possible explanations. However, the total combination of features, whilst not absolutely diagnostic of any condition, is, especially when considered in the presenting clinical context, highly suggestive of a dilated cardiomyopathy. Well done to all those who worked this out. In this case dilated cardiomyopathy was suspected and subsequently confirmed by echocardiography.