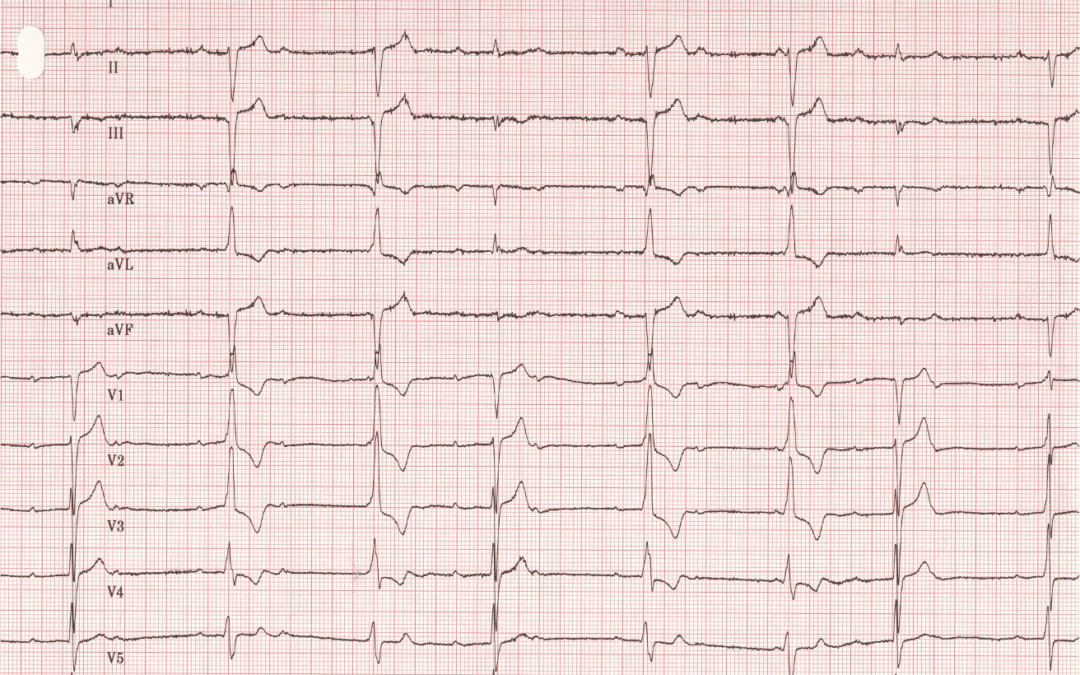 I don’t have any clinical information to accompany this months ECG but all I’m interested in is the rhythm.

What exactly is happening here?

I have numbered the beats to facilitate discussion 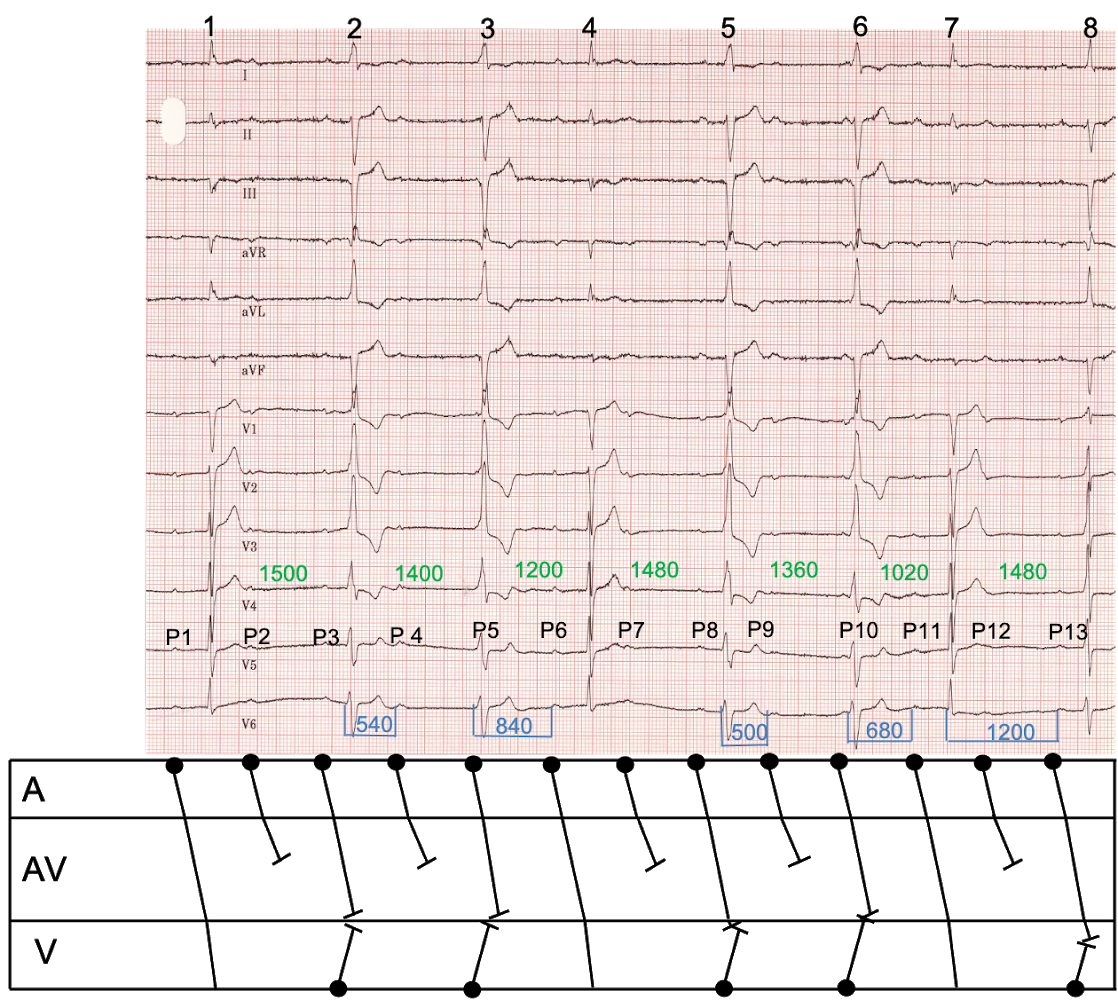 Thanks to Scott Walton for his further comments. I don’t think that intermittent complete heart block is the most accuratedescription for what we see here. If someone is in CHB for, for example, a day, or even just an hour, and then shows some conduction, it could perhaps be said that the CHB is intermittent, but in this case about half of the beats show intact AV conduction so perhaps 2nd degree AV block of an indeterminate type, or high-grade AV block, would be a more appropriate description. Let’s delve a little deeper.

I have identified and numbered all the P waves to help with the discussion. There is an underlying sinus rhythm with an atrial rate of 75/min but most of the sinus impulses do not conduct to the ventricles. The conducted beats – 1, 4 and 7 – all have a narrow QRS and normal axis, suggesting that there is no disease of the intraventricular conduction system. They are all conducted with a PR interval of about 370 ms, indicating delay at the AV node. As a consequence of some P waves failing to conduct, there are a number of escape beats. These have a broad QRS, indicating a ventricular origin, and they appear at a rate of about 43 bpm.

Why do some sinus impulses manage to conduct while others fail to do so? It’s because the AV node in this case has an abnormally long refractory period, or recovery time. I have indicated in milliseconds (in blue) some of the RP intervals – the time between ventricular and atrial activations – and it is evident that when the RP interval is 540 ms or less the P wave does not conduct, but when the RP interval is at least 680 ms, it does. This is known as RP-dependent conduction. According to this explanation the P waves numbered 3, 5, 8 and 10 should conduct, because they follow a long RP interval, and yet they are not followed by a conducted QRS.This is because the ventricular escape rhythm intervenes before the sinus impulse reaches the ventricles. I have measured and indicated all the RR intervals in milliseconds in green. It is evident that the escape interval – the elapsed time before an escape beat emerges – is between 1360 and 1500 ms. Let’s have a look at P10. This P wave appears after a long RP interval of about 1240 ms and therefore should conduct easily to the ventricles. However, while the impulse is making its way through the AV node, the escape interval, in this case 1360 ms, times out and a ventricular escape beat emerges. By the time the sinus impulse makes it as far as the ventricles, they have already been depolarised and are therefore refractory to further stimulation. Beat 8 is interesting because the sinus impulse, arising after an RP interval of 1200 ms is easily able to conduct and it reaches the ventricles at exactly the same time as the escape interval of 1480 ms times out. The ventricles are therefore activated partly as a result of conduction via the AV node and partly as a result of the discharge of ventricular focus, so beat 8 is a fusion beat, as Scott pointed out, with a QRS that is intermediate in appearance between the shapes of the conducted and escape beat complexes.

I think it is possible, though not certain, that beat 5 is also a fusion beat but with most of the ventricular muscle activated by discharge of the escape  focus and perhaps with a small contribution from the sinus impulse, which appears after an RP interval of 1000 ms. Although QRS 5 is broad it has a slightly smaller S wave in V6 than the other escape beats, and this may be the sign of a minimal degree of fusion.

In this ECG only P waves 2, 4, 7, 9 and 12 can accurately be described as blocked. P waves 1, 6, 10 and 13 are all conducted, while P waves 3, 5  8 and 10 are best described as non-conducted (although, as described, it is possible that P8 just about manages to conduct and produce a fusion beat). All the non-conducted impulses are not ‘blocked’: they do conduct over the AV node but are unable to depolarise the ventricles because they were beaten to it by the ventricular escape focus.

This then is sinus rhythm with second-degree or high-grade AV block, depending on how these terms are defined, and a mixture of conducted, ventricular escape and fusion beats.

I have tried to illustrate all this in the accompanying laddergram.

Thanks are due to Scott Walton for his comments, without which there would not have been a discussion. Any further comments or questions – whether from Scott or anyone else – would be welcomed. As for next month’s ECG, would people rather I presented something a bit simpler? Please let me know what sort of thing you’d like to see!