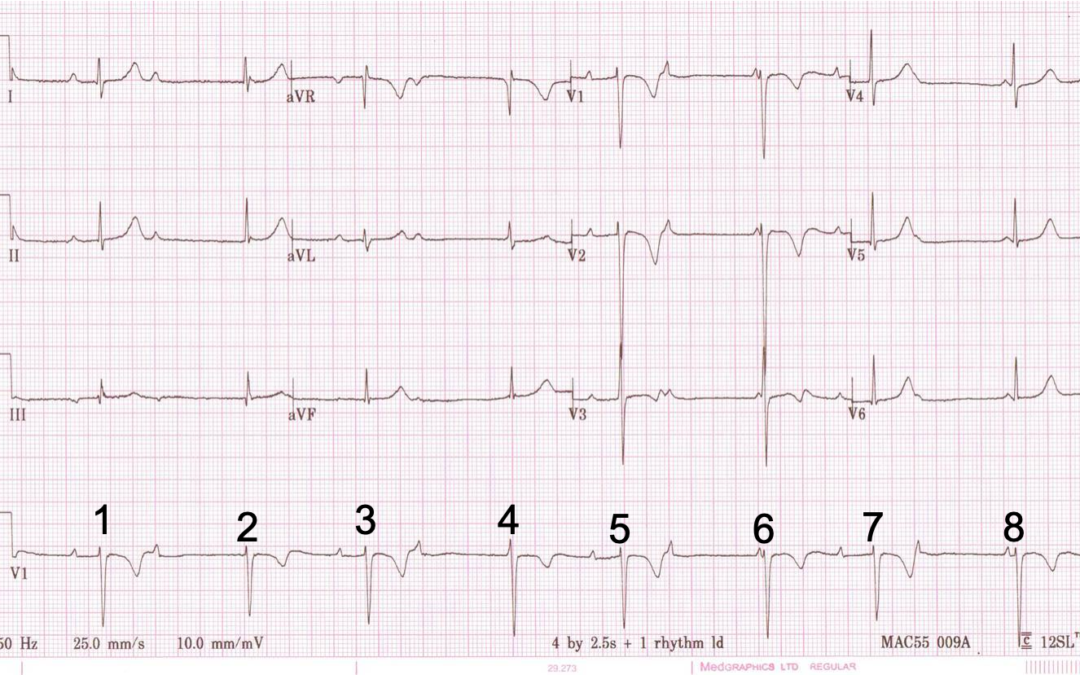 I don’t have any clinical history to go with this ECG, but how best should we describe the rhythm?  I have numbered the beats to facilitate discussion.

I agree with Scott’s analysis that this is second-degree AV block in which beats 1, 3, 5 and 7 are conducted beats and beats 2, 4, 6 and 8 are junctional escapes. There is an underlying sinus arrhythmia in which two of the P waves cannot be visualised because they occur simultaneously with QRS complexes (beats 2 and 4).

Once all the P waves have been identified it can be seen that only 1 in 3 of them are conducted. This may lead some to describe this as an example of high-grade block, but only one of each pair of non-conducted P waves can truly be described as being blocked – failing to conduct when they would be expected to – because the other non-conducted P wave in each pair occurs at such a time – almost simultaneous with the junctional discharge – that it cannot possibly conduct to the ventricles.

As there are never two consecutively conducted P waves, this cannot be described as either Mobitz I or Mobitz II AV block. Instead, it is a variety of second degree block that doesn’t fit comfortably into the Mobitz classification. The phenomenon we see here in which conducted beats alternate with escape beats is often described as an escape-capture bigeminy. I have tried to illustrate all of this with a laddergram, which now accompanies the 12-lead ECG.

One question: why do the PR intervals of the conducted beats vary slightly?

Continue the discussion in the comments and share your thoughts.

The question I asked above is: why do the PR intervals of the conducted beats vary slightly? The answer is linked to the sinus arrhythmia. The refractoriness of the AV node, and therefore its ability to conduct, depends on the time that elapses between an escape beat and the next P wave, which is assessed by the RP interval – the time between the beginning of the QRS and the beginning of the next P wave. The longer the RP interval, the longer the AV node has to recover and the better it can conduct. A long RP interval is therefore associated with a short PR interval and vice versa. This is known as RP/PR reciprocity and it is clearly demonstrated by comparing beats 3 and 7 – see below. The RP interval to beat 3 is 840 ms and the PR interval of beat 3 is 260 ms. Because of the sinus arrhythmia, the RP interval to beat 7 is only 660 ms and the PR interval consequently increases to 320 ms.