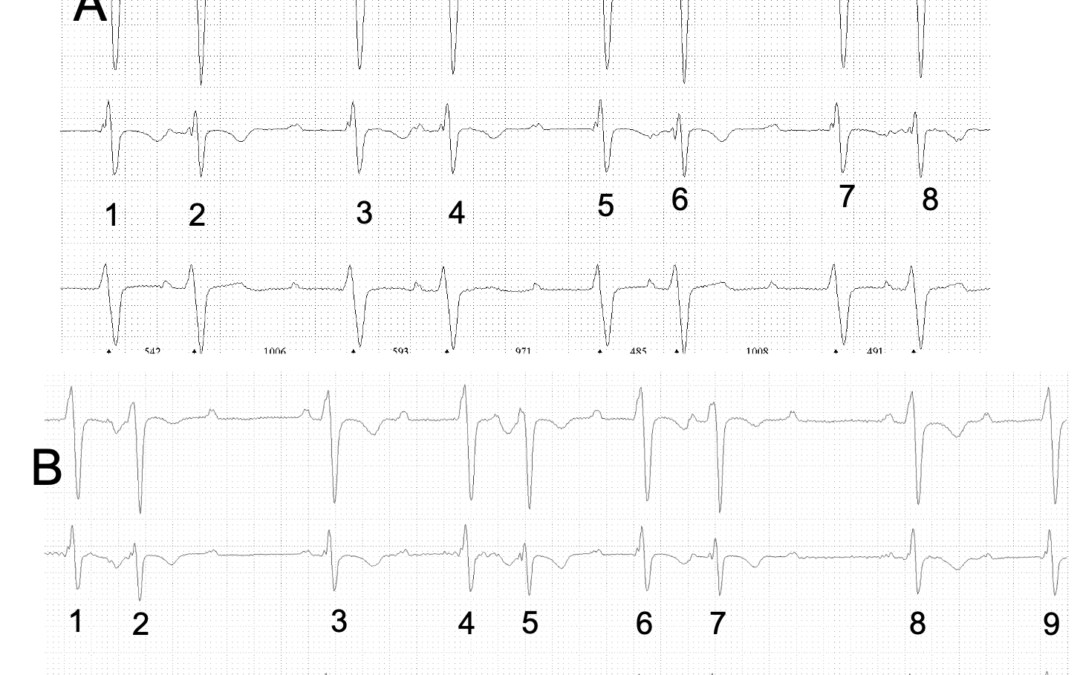 Something a bit different this month: two 3-lead extracts (A and B) from an ambulatory ECG recording. I have numbered the beats in each strip to facilitate discussion. I’m afraid I don’t have any clinical details but my question is a simple one: what on earth is going on here?

I have drawn laddergrams to illustrate what I think is probably happening in these two Holter extracts. Let’s deal with the two strips individually.

In strip A (figure A) there is a fairly regular atrial rate at about 80 bpm with alternating normal/long PR intervals, producing an irregular ventricular rhythm with coupled beats. What could be the cause of the alternating PR intervals? As several people have reasoned, this phenomenon is likely to be due to dual AV nodal pathways – one fast, the other slow. 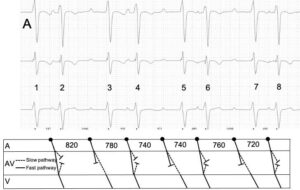 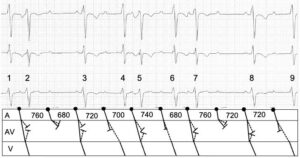 After beat 2 there is a P wave not followed by a QRS and presumably this is due to simultaneous block in both pathways, providing evidence that it is not only the fast pathway that is diseased – there must be disease in the slow pathway too. For beat 3, both pathways have had time to recover and the ventricles are activated via the fast pathway, as for beat 2. Beat 4 has a long PR interval because the 2:1 block in the fast pathway continues and activation of the ventricles is brought about by transmission down the slow pathway. Beats 5, 6 and 7 continue this pattern of 2:1 block in the fast pathway, although beat 6 has a slightly shorter PR interval than might be expected and I don’t know why. After beat 7 there is another blocked P wave, presumably because of simultaneous block in both AV nodal pathways. Beats 8 and 9 continue the short PR/long PR sequence. Thus, it appears that in ECG B there is 2:1 block in the fast AV nodal pathway and occasional block in the slow pathway. Wenckebach AV block is almost always due to a conduction disorder within the AV node, so in this case the intermittent block in the slow pathway may well be due to the Wenckebach phenomenon. I did wonder whether some of the variation in conduction might be due to changes in the atrial rate but on examining the PP intervals I can’t see any evidence of this.

In summary, this ECG appears to show evidence of dual AV nodal pathways with 2:1 block in the fast pathway and intermittent Wenckebach block in the slow pathway, producing second-degree AV block in strip B. If you have an alternative theory or can provide any additional explanatory detail, please post your comments.