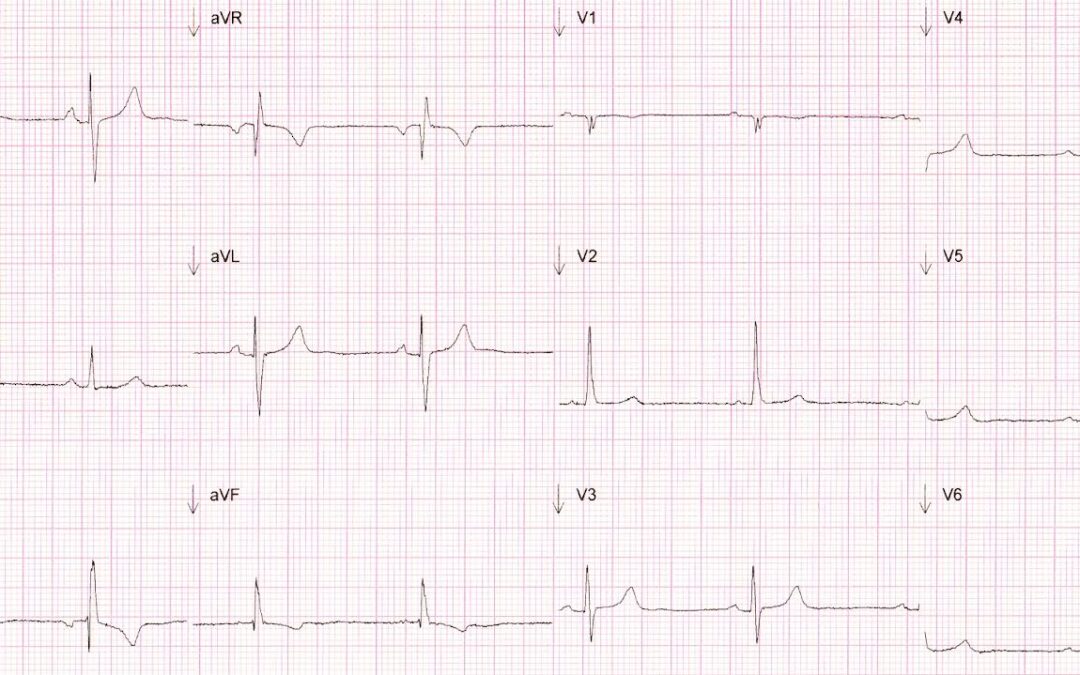 This month’s ECG was recorded from a 33-year old female who had been complaining of palpitations. Physical examination revealed no abnormalities and there was no history of heart or pulmonary disease. Is the ECG normal? If not, what are the abnormalities and what could account for them?

Level of difficulty: hard! (I think)

As Laura and Kathryn have worked out, this is a case of inadvertent switching of the two yellows: the left arm and V2 cables. We are all familiar with how to identify that the left arm and right arm connections have been swapped – it’s pretty obvious – but other errors of connection are more difficult to spot and I suspect they often go unrecognised. The abnormalities on this ECG, as several people have pointed out, are an abnormal R wave progression from V1 to V3 and a right axis deviation with slightly abnormal QRS morphology in some of the limb leads. Also, As Max observed, the P wave is bigger in lead I than that in lead II. The ECG as it should originally have been recorded is shown in figure 1. This allows us to see exactly what the effects were of the cable switch. In the ‘incorrect’ recording there is a slight right axis deviation, producing deep S waves in lead I and a noticeable R wave in aVR. There is also a slight leftward shift of the P wave axis. Additionally, there is discordant T wave inversion in aVF and lead III. Unusually, there is also an rsR’ complex in lead III. The most striking changes are in the chest leads, with the normal R wave progression disrupted

Figure 1. ECG of the month recorded with correct electrode connections.

by a completely positive QRS in V2.  The only lead which is not affected by the LA/V2 cable switch is lead II, as this represents the potential difference between the right arm and left leg. The LA/V2 switch produces a modified lead I in which the positive pole is in the V2 position. This means that the recording direction is no longer horizontal and not entirely in the frontal plane. It also means that both recording electrodes are completely or substantially to the right of most of the cardiac muscle. The resultant distortion of Einthoven’s triangle means that Wilson’s central terminal is shifted, leading to a misrepresentation of all the chest leads, not just V2.

I don’t think the effects of this cable switch are well known and I’ve never read about them. However, I have come across this situation a few times and the ECG changes seen in this example seem to be pretty typical. Figures 2 and 3 are two more examples which show similar features.

If there is a lesson to be learned from this month’s ECG it is probably that when you come across an ECG with odd and apparently inexplicable features, you should consider the possibility of a technical error. A swapping of the left arm and right arm connections may be the commonest and most easily recognised misconnection error but it’s not the only one, and other such errors may have more subtle and less well-known effects on the ECG. 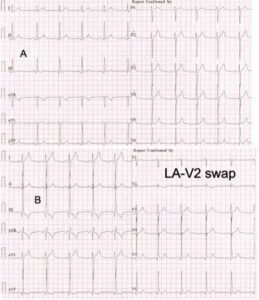