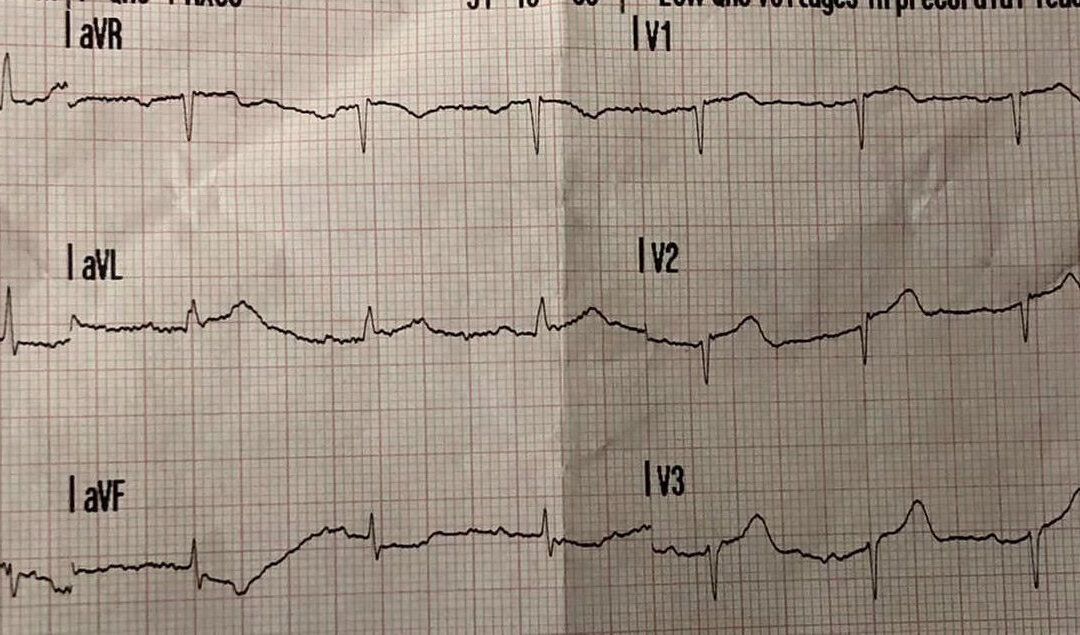 Something a bit different this month. An emergency ambulance was despatched to the home of a 50-year-old morbidly obese male who was complaining of severe, crushing chest pain that had started 30 minutes earlier while he has eating. There were no other symptoms. BP was 190/108, and there were no lung sounds on auscultation.

How should the ECG be interpreted? There is much artefact owing to the severe chest pain and the fact that the patient was sitting in a chair, but such is the reality of recording emergency domiciliary ECGs in difficult circumstances; the ECG still needs to be interpreted.

What should the paramedics do? Possible options include:

Or perhaps there are other possible courses of action. What is your interpretation of the ECG and what would you do?

Here’s a 2nd ECG, recorded 5-10 minutes after the first. Does this help any waverers to make up their minds as to what should be done?’

The main concern here is that the patient may be having a myocardial infarction (MI), so let’s have a close look at the first ECG and see what it tells us. There is a lot of artefact but we have to try to see beyond it. The limb leads show that there is sinus rhythm at a rate of about 75 bpm, with a normal QRS axis, but there appears to be downsloping ST depression in leads II, III and aVF and possibly slight ST elevation in aVL. Turning to the chest leads, we can see that there is a poor Rwave progression from V1 to V3. Whilst poor R wave progression is commonly associated with old MI, loss of R wave height from V1 to V3 can develop very soon after an acute occlusion of the left anterior descending coronary artery(LAD), in which case it is not caused by myocardial necrosis – it’s too early for that – but by ischaemic myocardial stunning leading to loss of electrical function. It also appears that there is slight ST elevation – perhaps 1 mm – from V1 to V3 and maybe 1.5 mm in V4. According to perhaps the most widely used criteria for diagnosing acute MI (see table 1), the ST elevation from V1 to V3 is of borderline diagnostic significance but the ST elevation in V4 is certainly suggestive of acute MI (1). Although the table states the diagnostic levels of ST elevation in absolute terms, in reality there is a relation between ST elevation and QRS amplitude – the principle of proportionality – and ST elevation of 1 mm when the S wave depth is only 5 or 6 mm, as here, is much more likely to indicate acute MI than to be a normal variant.

However, it is not only the ST elevation and loss of R wave height that are suggestive of an acute anterior MI, the T wave amplitudes and shapes support this diagnosis too. The T waves are abnormally tall in relation to QRS amplitude from V1 to V4 (it’s that proportionality principle again) and they are quite broad too, creating an appearance that is often described as ‘fat’ or ‘bulky’. This is an appearance that is difficult to define but can be recognised with experience and it is suggestive of a hyperacute MI.

There is therefore much evidence from the chest leads of an acute occlusion of the LAD, and the inferior ST depression here is undoubtedly reciprocal to the anterior ST elevation.

ECG 2, recorded 5-10 minutes, after the first ECG, is very similar but perhaps with slightly taller T waves in the anterior leads, consistent with an evolving MI. Of note, the T wave in V1 is taller than that in V6, a phenomenon that has been described as ‘loss of precordial T wave balance’ or ‘new tall T-wave in V1’ (NTTV1) and which is reportedly associated with acute LAD occlusion.

The ECG and history are therefore highly suggestive of an ST-elevation MI, so the only remaining question concerns the most appropriate management of the condition. To preserve as much at-risk myocardium as possible, and to maximise survival chances, the current recommendation is thatemergency coronary angiography, with a view to proceeding to primary percutaneous coronary intervention (PPCI) if appropriate, is the best option if the presentation is within 12 hours of the onset of symptoms and if PPCI can be delivered within 120 minutes of the time when fibrinolysis could be given (2). In this case the paramedics were on the scene within 30 minutes of the onset of symptoms and the nearestPPCI centre was 20 miles away, so it was better to transport the patient to the PPCI centre rather than take him to the nearer non-PPCI hospital.

An ECG was recorded on admission to the PPCI centre and it is shown here (ECG 3). The ST elevation, straightening of the ascending limb of the T wave and high T wave amplitude are clearly typical of an acute LAD occlusion and developing anterior MI. Coronary angiography showed a mid-LAD occlusion, which was stented.

As is often the case, the correct treatment strategy here was dependent on an accurate initial diagnosis. Whilst this was not a particularly difficult diagnosis to make, there were some subtleties in the initial ECG pattern whose significance might not have been appreciated by an inexperienced clinician. Strict diagnostic criteria in terms of millimetres of ST elevation in particular leads can be helpful, and they are often incorporated into patient pathways in the management of acute chest pain, but they lack sensitivity, as they do not take into account the principle of proportionality and they ignore difficult-to-define abnormalities, such as ‘bulky’ T waves. In order to recognise some of the more subtle ECG abnormalities caused by acute coronary occlusion it is necessary to go beyond simple measurements and acquire pattern-recognition skills that come largely from extensive experience.

I am grateful to Ralph Mangrella, paramedic in New York City, for sharing this case with me. 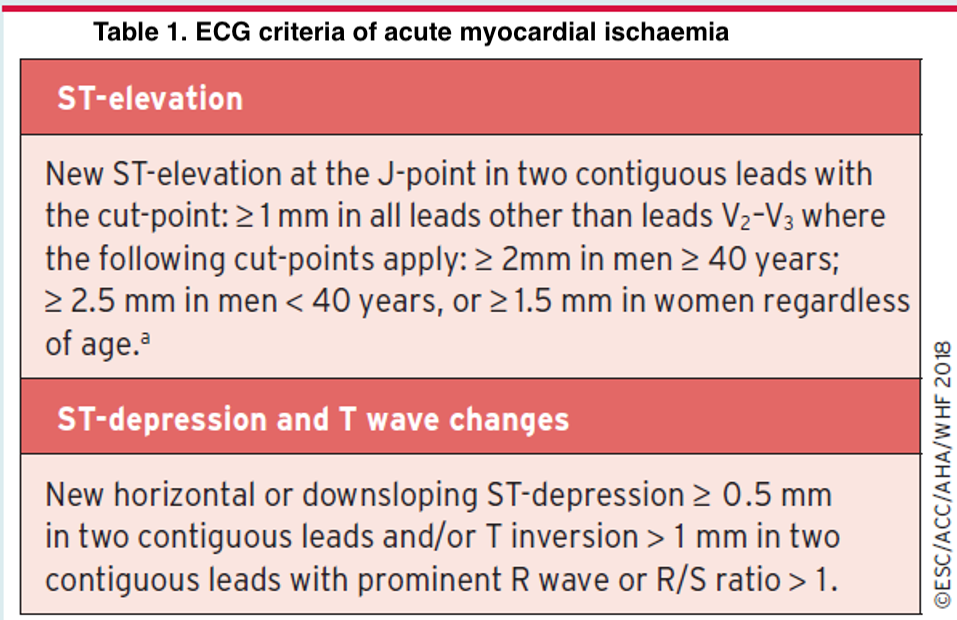 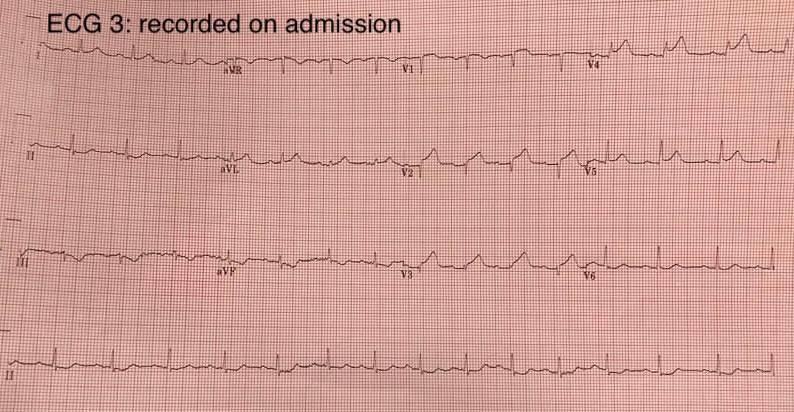