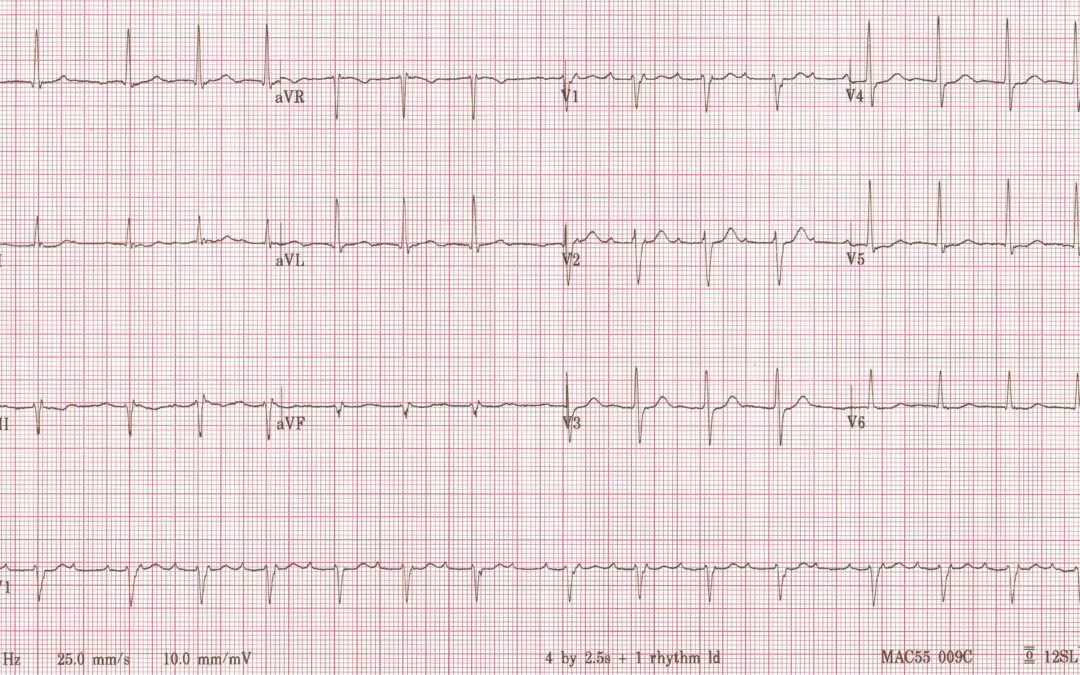 I’m afraid I don’t have any clinical information to accompany this ECG, but all I’d like is a description of the rhythm, with as much information and explanation as you can provide.

OK, first things first. The P waves are of low amplitude in most leads and negative in I and aVL, although strongly positive in V1 and V2, and the atrial rate is 200 bpm. This is because there is an atrial tachycardia. The ventricular rate is irregular and far less than 200 bpm, so there is AV block. It might be tempting just to describe this as atrial tachycardia with variable block but I think we can go a bit further. The PR interval of the conducted beats increases gradually until there is a pause, after which the PR interval is shorter, but this cannot be described as simple Wenckebach block because there are never two consecutive P waves that conduct: every conducted P wave is followed by one or two non-conducted P waves, and this is most likely because of dual-level AV nodal block. Dual-level AV nodal block is commonly seen in atrial tachycardia and atrial flutter and accounts for many of the ECGs that we might describe as showing ‘atrial flutter with variable block’. The accompanying laddergram shows how the dual-level AV nodal block might be operating in this case. It shows long Wenckebach sequences in the upper AV node, with those impulses that make it to the lower AV node showing 2:1 block out of the lower AV node and into the ventricles.

Thanks to everyone who contributed to the discussion. Everyone got at least part of the way to the solution and Scott Walton additionally recognised the dual-level AV nodal block.